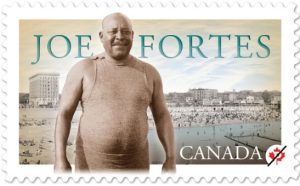 Seraphim Joseph Fortes was most likely born in Port-of Spain, Trinidad, British West Indies on February 9, 1863. When a teenager, he shipped out on the Brigantine, Robert Kerr, to England about 1880. He lived a few years in Liverpool, where he showed his swimming skill by crossing a 1,200 metre span of the Mersey River, among other swimming and diving feats.
In 1885, Joe was again a crew member on the Robert Kerr, which sailed via Cape Horn to Panama and then on to Vancouver, arriving here in September 1885. The ship was badly damaged near San Juan Island, therefore the crew was discharged on arrival at Granville, an early name for Vancouver.

In Vancouver he worked at many odd jobs, including as a barman at the Sunnyside Hotel, Bodega Saloon, and Alhambra Hotel.
English Bay became his favourite part of the city and he swam there as often as possible. Initially, he was recognized as the unofficial guardian of English Bay because of the volunteer work he performed in maintaining cleanliness and orderly behaviour on the beach. 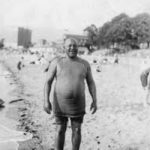 In 1900, Joe became an official employee of the city and received a monthly salary. As guardian of English Bay beach, his duties included life guarding, swimming instructions and beach patrol as a special constable. He is credited with saving at least 29 lives from drowning, including adults and children, as well as teaching three generations of Vancouver children to swim. He was especially popular with young people.

In 1905, Joe's temporary tent near the beach was replaced with a new house at 1708 Beach Avenue, allowing him to devote his full attention doing what he loved. 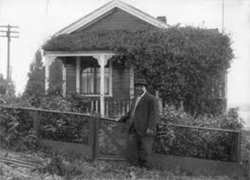 Seraphim Joseph Fortes died of pneumonia on February 4, 1922. His funeral, on February 7, was conducted at Holy Rosary Cathedral to an overflow crowd, and an estimated 10,000 persons lined Dunsmuir, Granville, Hastings and Main streets. Schools all over Vancouver observed a 5-minute silence, as his funeral procession made its way to Mountain View Cemetery.

In addition to the achievements and recognition noted below, dating back to 1910, he continues to be honoured as an iconic person in our history. This plaque was unveiled on October 1st, 2022, by the Vancouver Heritage Foundation at English Bay Beach.

“A young Black sailor of Caribbean origins, Seraphim “Joe” Fortes arrived in Vancouver then known as Granville, in September 1885. He discovered his beloved English Bay by chance c1887 while rowing supplies to a logging camp. Over the following years Joe defied the prejudices of the time, endearing himself to Vancouverites as the city’s first Official Lifeguard. He also patrolled the area every night as a Special Constable of the Vancouver City Police. Thousands paid tribute to Joe at his civic funeral on February 7, 1922. His small cottage stood on this site from 1905 to 1928.” Sponsored by Karen Seaboyer in memory of Al and Fern Seaboyer.

Recognition, honors and tributes dating back to 1910:
• In 1910, The City of Vancouver recognized him as the first English Bay lifeguard after the park board decided to create such a post and made him a special constable, qualifying him to carry a revolver. He was presented with a gold watch and certificate in recognition for his faithful service.
• In 1927, a Memorial Drinking Fountain was erected at Alexandra Park facing the beach where he had served as guardian and swimming teacher for over 20 years.
• In 1976, the Joe Fortes Branch of the Vancouver City Library was established at 870 Denman Street, not far from English Bay and a tribute that would have pleased him, since it was put there for children to use daily.
• In 1985, a restaurant at 777 Thurlow Street was dedicated to him
• In 1986 the Vancouver Historical Society formally declared Joe as “Vancouver Citizen of the Century.”
• In 2002 his life was portrayed in a short animated film by the National Film Board of Canada.
• In 2013 a Canadian stamp was issued in his honour.