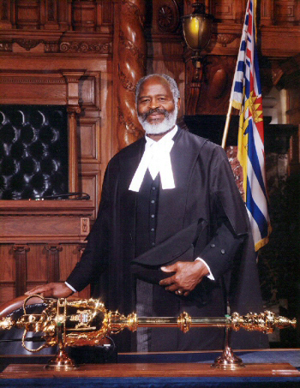 Emery Barnes was elected to the Legislative Assembly of British Columbia in 1972 as the first member in the double-member riding of Vancouver Centre, along with former MLA Gary Lauk. He and Lauk were re-elected in 1975, 1979 and 1983. In 1986 after Lauk’s retirement, Emery was joined by Mike Harcourt. In 1991, he was elected to the revised single-member riding of Vancouver-Burrard. At that time he was appointed Deputy Speaker of the Legislature. In March of 1994, he became the first Speaker in B.C. to be elected by a secret ballot of the MLAs. 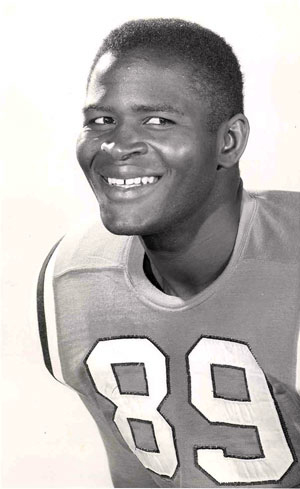 Emery earlier won fame in football, basketball and track and field. He was an alternate hi-jump member of the 1952 US Olympic Track and Field team. He played pro-football briefly in 1956 for the Green Bay Packers of the National Football League before joining the BC Lions in 1957. He was also a member of the Oregon State Sports Hall of Fame and the Portland, Oregon, Interscholastic Sports Hall of Fame. The main focus of his life and career was helping the disadvantaged in society, with a strong emphasis on worldwide human rights and world peace. He was active in developing awareness of Black History in B.C. and furthering the principles of multiculturalism, particularly in the public sector.

The following are quotes made by his colleagues the day he became Speaker of the Legislative Assembly of British Columbia, and quoted in the Sunday Oregonian, 2 April, 1995 :

Cliff Serwa, a member of the opposition Liberal Party: “Your personal dignity, honour and integrity are beyond question and reproach, and you are a most fit individual to sit in this very important position as Speaker.”

Gary Farrell-Collins, Head of the Liberal Party: “I have nothing but unanimous respect for Emery. He’s really a very fine man, and he carries a lot of wisdom. Sometimes in the Legislature, amidst all the nastiness, it’s nice to have someone who is fair. He’s the kind of guy who really doesn’t have to raise his voice.”

In 2003 the City of Vancouver named a park in his memory at 1100 Seymour Street.

Reference: Biography submitted by Office of the Speaker, Province of British Columbia.

… Echoes Through the Black Continuum