Fastest man on earth … The Harry Jerome International Track Classic is held annually in honour of Harry Jerome, he has inspired a generation of Canadians and has a legacy of athletic excellence and commitment to youth and sport. 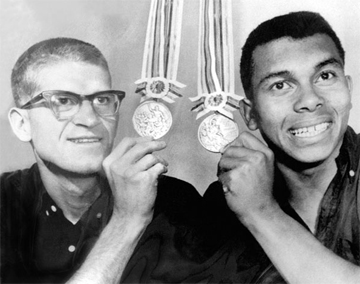 Harry Winston Jerome devoted his time to the well-being of children. A remarkable athlete, his renown in athletics tends to overshadow the work he did in other areas of his life. Besides his success in the athletic arena, he was a tireless promoter of sports among young people and is among the small number of Blacks across Canada to receive the Order of Canada. Perhaps some of those his career has inspired will find it easier reaching the top because of Harry Jerome.

Harry Jerome was born in Prince Albert, Saskatchewan, in 1940. The son of a Pullman coach attendant on the Canadian National Railway, his family moved to Vancouver when he was 12. Upon entering North Vancouver High, his teachers encouraged him to run and he joined the local track club, the Optimist Striders. His success was immediate.
When he was 18, he broke Percy Williams’ 31-one-year-old record in the 220 yards and the following year ran the 100 yards in what was then the phenomenal time of 9.5 seconds. Harry was offered an athletic scholarship at the University of Oregon. It was an offer that Harry accepted as perhaps the only way of getting a higher education and continuing his athletic training at the same time - an opportunity not available at that time in Canada. 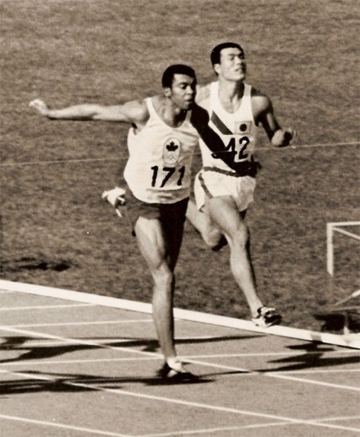 Under the expert coaching of Bill Bowerman, Jerome was on his way. At a meet in Saskatoon in 1959, at the age of 19, he ran the 100 metres in 10 seconds flat. The time was later confirmed as a world record, which he shared with the German runner, Armin Harry, and which remained unbroken until the 1968 Olympics.

As a member of the Canadian team to the Rome Olympics of 1960, Jerome pulled a muscle in the semi-final heat of the 100 metres which meant not qualifying for the final.

At the British Commonwealth Games in Perth, Australia, in 1962, Jerome ruptured a muscle in his left thigh.

When the injury at Perth sidelined him for nearly a year, many of his detractors expected he would never run again.

But Jerome made an incredible comeback. In the 1964 Olympics in Tokyo, he won the bronze medal in the 100 metres. Even more amazing for a man of his age, was his performance in Edmonton in 1966 when he ran the 100-yard dash in 9.1 seconds. He was unmistakably in the world class again. This world record, which he shared with US sprinter Bob Hayes and others, stood until early 1974. Further vindication came in the British Empire and Commonwealth Games in 1966, when he won his first gold medal in a photo finish with Tom Robinson of the Bahamas. He went on to win the 100 metres at the Pan American Games the following year. 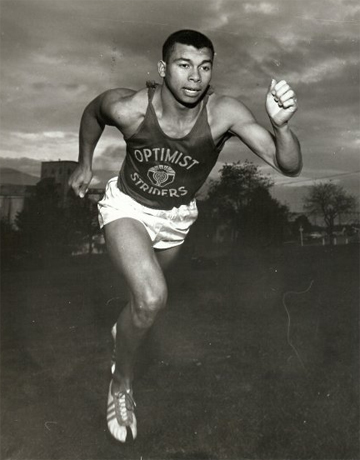 In the meantime, Harry Jerome had become a physical education teacher at Templeton Secondary School in Vancouver. His own experiences at international meets had convinced him of the need to provide better training and facilities to our youngsters if Canada was to compete successfully with other countries. It was only natural, therefore, that after his retirement from competition in 1968, Harry Jerome should become an activist in promoting track and field to youngsters in high schools.

Under the aegis of the Federal Fitness and Amateur Sports Directorate he set up cross-country sports clinics. Nicknamed “Harry Jerome and His Road Company,” six of Canada top athletes led by Jerome traveled more than 11,000 miles, giving demonstrations and holding coaching clinics at high schools across the country.

In 1971, Jerome was awarded the Order of Canada - one of Canada’s highest symbols of national recognition. In that same year, he was named Athlete of the Century by the province of British Columbia. In 1975, he founded the Premier’s Sports Awards Program, which is still being used by school districts in the province. He also sat on the BC Human Rights Commission and spent much of his time agitating for better representation of visible minorities in the media and advertisements.
Jerome died suddenly of a brain aneurysm in 1982 at age 42. In 1988, the people of British Columbia commemorated his personal accomplishment and social contribution by erecting a nine-foot statue in Stanley Park. The statue stands a few hundred metres from Brockton Oval where Jerome trained for the world records he set and the medals he won.

The book "Running Uphill - The Short, Fast Life of Harry Jerome " published circa 2006 can be found online through a variety of book sellers.
In October 2010, the film “Mighty Jerome” was released chronicling “one of the greatest comebacks in track and field history”.