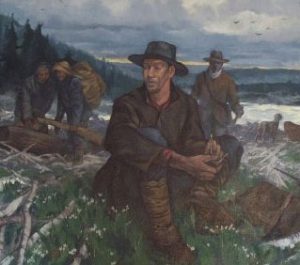 Prior to coming to B.C., Giscome worked building the railroad across the Isthmus of Panama and then traveled on to California. He appeared in Victoria, British Columbia, with the California Black migration of 1858 to 1859.

In 1862 he journeyed from Quesnel with his Bahamian partner, Henry McDame to prospect the Peace River Country. They wintered in Fort St. George and in April 1863 went North again up the Fraser River. They had intended to travel up the Salmon River north of Prince George, but upon reaching it, they found it running too high and their First Nations guide suggested an alternate route. They continued up the Fraser to a spot their guide knew, then walked nine miles to what is now known as Summit Lake. From there, they headed north once more along Crooked River and reached their destination of Fort McLeod in a short time. Upon reaching the fort, they were greeted with a salute of about 30 shots in their honour as they were the first non-First Nations to travel that route.

In the 1870s, the nine-mile walk became known as Giscome Portage and was used by miners and other travelers heading north into the Omineca and Peace districts. The portage saved time and money as it was an easy way over the Continental Divide into the navigable streams and rivers on either side. It was used until the era of highways and railroads began after World War One. Today it is a protected area within British Columbia Parks and a shortcut for canoeists traveling between Pacific and Arctic watersheds.

The partners, after traversing the portage and arriving at Fort McLeod, proceeded on into the Peace River Country. They prospected both the Peace and Smokey Rivers, but did not find much gold. Later, they worked in Omineca and Cassiar districts. In 1874, Henry McDame made an important strike on the tributary of the Dease River and he and John Giscome, along with others, worked the claim with notable success for years. The creek on which Henry McDame found gold, became known as McDame Creek, and like the Giscome Portage, became a relatively famous location.

After working the claim together, John and Henry parted company. Some reports suggest that Henry McDame was unable to hold on to his wealth like so many other miners. He died in the north at the turn of the century.

John Giscome retired to Victoria where he invested his earnings in real estate. For the last twenty years of his life, he bought and sold property. When he died in 1907, he left his fortune which was valued at $21,000 (equivalent today of half a million dollars), to his landlady Mrs. Ella Cooness.

Even though John Robert Giscome is relatively unknown, his name survives in and around Prince George where a former sawmill town, many rapids and a canyon bear his name. It is difficult to know what kind of man he was as he died a childless bachelor and no diary has appeared at this time. British Columbia Directories, however, list him in Barkerville, Germansen Landing, Northern Coast and McDame's Creek in which he is consistently listed as a “miner”. The 1891 Directory changed “miner” to “explorer” but by that time, John was living in Victoria where he remained until his death. He is buried at the Ross Bay Cemetery, Victoria.

Reference:
The original materials for this story were prepared by Cecil Giscombe, Department of English Illinois State University for the Giscome Portage Historical Society now known as the Huble Homestead/Giscome Portage Heritage Society.