Renowned Classical Pianist & Music Educator.  “If children hear fine music from the day of their birth and learn to play it, they develop sensitivity, discipline and endurance. They get a beautiful heart.” Shinichi Suzuki 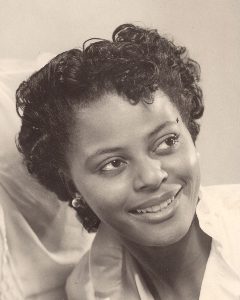 Ruby Sneed was born Ruby Evelyn Proctor on April 30, 1917 in Edmonton Alberta. Her self-educated parents were part of the 1909 migration of black pioneers from Oklahoma to Alberta. Ruby’s parents encouraged all three of their daughters to pursue formal education and excel in their areas of interest. Ruby, the eldest, excelled both academically and musically starting piano while she attended public school. Her sister, Eleanor Collins, excelled at jazz vocals and would go on to become the first black artist in North America to have her own national television series. At the age of 95, Eleanor was awarded the Order of Canada. Youngest sister Pearl Hendrix-Brown pursued a career in the business sector, but in later years returned to her love of theatre, music, and the performing arts.

To advance her classical music studies Ruby moved to Vancouver, B.C. in the late 1930’s. Under the tutelage of Canadian pianist and composer, Jean Coulthard and European concert pianist, Jan Cherniavsky, she completed the Royal Conservatory of Toronto ARCT (Associate of the Royal Conservatory of Toronto) exams and was awarded the highest marks in Western Canada. Ruby then launched her career as a professional musician. She started a piano teaching practice, performed in public concerts and recorded for CBC Radio. As well, she wrote arrangements for and sang with the CBC Swing-Lo Quartet.

During the early days of her music career, Ruby had the singular honour of performing for the celebrated African American contralto, Marian Anderson. Impressed with Ruby’s talent, Anderson would go on to mentor her. Very few black women who pursued classical music careers in the early 1900’s were taken seriously by the public. However, Ruby was highly motivated and determined to overcome any social barriers that would impede her goals. Studying the careers of successful female North American and international classical musicians helped her craft her own professional path. She was particularly inspired by the careers of Gina Bachauer, Rosina Lhevinne, Leontyne Price and Lili Kraus.

In 1942 Ruby met and married Stanley Sneed. They had two daughters Brenda and Theresa.

By 1948 Ruby began to specialize in early childhood music education. Astutely aware of young children’s capabilities she began teaching piano to eager learners at the Vancouver Chinese YMCA. Nine years later she opened her own private studio on West 8th Avenue in Vancouver working with children as young as 3 years old. Over the next 28 years she would nurture the musical talents of some 75 students each year. 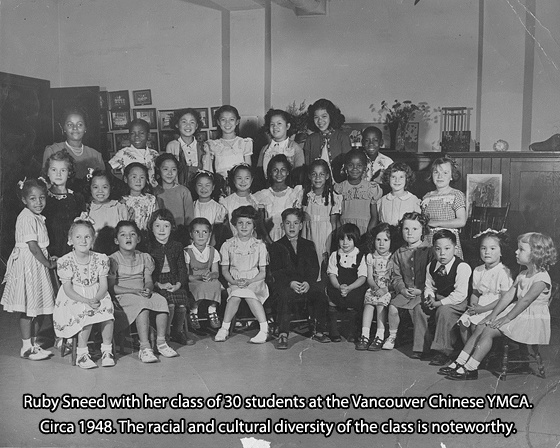 Several of Ruby's students who started their piano lessons with her when they were ages 4 to 6, earned scholarships, medals, awards and first-class honours in local, provincial, and international competitions on a consistent basis. Many more pursued graduate studies and teaching positions at such major musical institutes as the Brussels Conservatory, Moscow Conservatory, Paris Conservatory, Juilliard Schools of Music, University of Indiana (Bloomington), UCLA, Aspen Music School, and Banff Centre of the Arts.

During this period Ruby was involved with several other arts endeavours. For example, she wrote the script The Promised Land for the CBC TV series Heritage which chronicled Black immigration to Canada in the 1900’s.

In 1972 a grant from the Community Music of Greater Vancouver (a.k.a Vancouver Academy of Music) enabled Ruby to travel to Japan where she observed firsthand the internationally renowned Suzuki Talent Education Method for piano students. Impressed with the appeal and effectiveness of the Suzuki philosophy, she organized the first Canadian Suzuki Piano Program at the Vancouver Academy of Music. It met with an enthusiastic enrollment of some 50 children ages 3 to 5. The program was so successful she returned to Tokyo in 1974 with two of her students who performed in several recitals throughout Japan.

Word spread quickly in Western Canada about Ruby’s development of the Suzuki philosophy of teaching adapted to the piano. Before long she was a sought-after lecturer and teacher of master classes at institutions throughout North America and abroad. She made several guest appearances on educational television in Canada and the United States right up until her untimely death in 1976.

Blessed with an engaging personality and a passion for teaching Ruby employed great patience and discerning care. Her commitment to music education was fostered not only by the desire to promote excellence in piano performance but also by an abiding faith in children. She felt it was the express purpose of the teacher to help them realize their innate talents. Ruby’s lifework was devoted to a deeply held belief in the power of music to elevate the human condition.

The B.C. Black History Awareness Society is grateful to Theresa Lewis, daughter of Ruby Sneed for her written submission of this story and images; and, for granting permission to publish.

Transcript: Marian Anderson broke one of personal rules on Wednesday afternoon to make a dream come true for a vivacious Vancouver Negro girl in her teens.   A year ago (1939) Ruby Proctor, who is studying piano in the city, heard Marian Anderson sing.  Since then as she practiced she dreamed of the day when the famous contralto should hear her play and perhaps advise her on her musical career. On Wednesday, in a large empty salon in Hotel Vancouver, Marian Anderson broke into the afternoon of complete rest that always precedes her concerts to listen to Ruby’s music.

INTRODUCED BY TEACHER Ruby, her eyes bright with excitement, and a large bunch of violets trembling in her hands, had been brought to Miss Anderson by her teacher Jean Coulthard Adams. Miss Anderson, quietly graciously seemed to radiate some of her own poise and calm to the girl before she led her to the piano.  Carefully, almost reverently, Ruby played a Bach Chorale and Debusssy’s “Garden in the Rain” with all Miss Anderson’s attention focused upon her.

IS IMPRESSED “I am very impressed with her playing” she told the teacher when her pupil was finished.  “It is amazing that she has accomplished so much with only a year and half of study.”  Later she suggested negro universities that the girl might enter to complete her career.

“I love music and I feel I can express myself through it in some way” said Ruby, who came to Vancouver from Edmonton two years ago.  She won’t admit that her ambition is to be a concert pianist, but her expressive eyes shine at the thought. 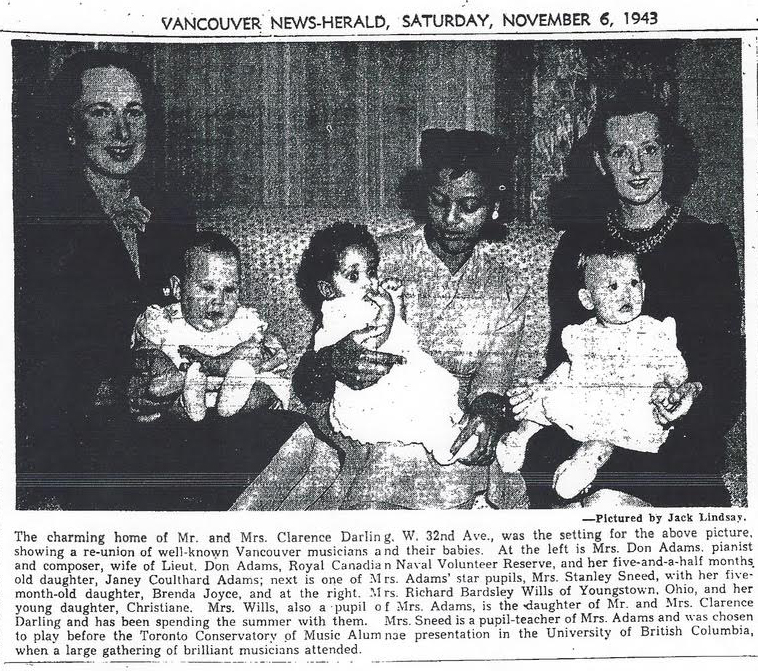